One of the strange things that happens to people like me, you know people who lost a spouse to death, is when people want to ask a question but are too socially conscious, respectful, kind or just to damn afraid to ask.  People will dance around questions, hint at what they want to ask, but they just won't come out with it.

I recently had one of those awkward exchanges with a co-worker who is  much older than me, on his experience of having dated a woman who was a widow.  He was telling me how strange it was, how it was easier for him to date divorcees, etc...and he wanted to crawl under a rock when he found out my story.  He tried in a round about way to ask some common questions that people have, but are afraid to ask.  So with that recent experience in mind, I offer up the following Q&A:

What is it like to date after you are widowed?

Awkward, super awkward, at first.  In my case, I had not been on a first date in more than 24 years and had been out of that game for a long, long time.  Along the way there were some foolish mistakes made and some stupid decisionst.  However, once the right one came along, there was nothing awkward, nothing foolish about it.  It just felt right, and perfect. 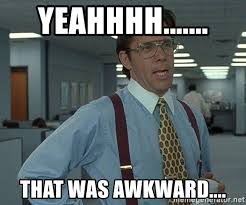 Don't you think it's kind of soon to start dating?  (or the flip side, when are you going to get out there again)

This is the one question that every widow will hear, in various forms, at some point.  It's either, don't you think it's too soon or isn't it about time your started to date.  The point is, everyone will have an opinion on this matter, especially those who have no idea what they are talking about.  As the old saying goes, opinions are like *$#holes, everyone has one and they think theirs doesn't stink.  Some people will date weeks after, some months, some years and some never.  This is a decision that can be made only by the widow themselves.  There was some great advice I read once that said, "I fulfilled every marriage vow I made right until the death do us part vow.  Can others say the same thing?  This person said whenever she gets flack from outsiders she would silently chant this to herself.  Me, I just throw that part in their face and peace out.  I've had good friends who have yet to acknowledge my marriage and deep down I think they just don't understand or are afraid of what they would do in a similar situation.  Does it bother me anymore?  Nope, it's your loss.  I'm loving my life. 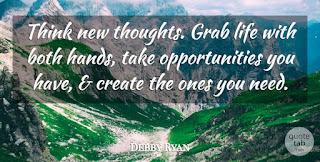 How did others take to the news that you were dating, engaged or married?

Like I mentioned above, I've had several close friends and associates that have never acknowledged my new marriage.  At first, it bothered me a little bit.  But, like all things in my life, I don't need acknowledgement from other people to be happy .  Most of the people I know were over the moon happy for me and have supported me along the way.  So, that has been a mixed barrel of results.

There was an interesting exchange that took place when I was dating Jennie, all behind the scenes and behind my back.  We took a great trip to Cancun.  Imagine that, two single adults going on vacation together.  Our photos seemed to cause scandal and word got back to people that I might be cavorting with a beautiful blonde in the Mexican sun.  Rather than coming to me and asking the questions, these people took the cowardly way and began to murmur.  I have written in another post, learn to fine art of saying *$@! off to people and choose your own path.  To those who were murmuring, I put a ring on it! 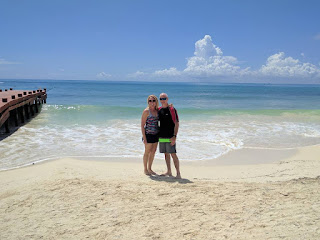 Did you take off your wedding ring before you started dating?

Like the question above, this can only be answered by the individual.  For me, I chose to stop wearing my wedding ring shortly after my marriage ended.  I put it away in the safe and never pulled it back out.  I did wear her anniversary ring around a chain for most of the first year afterwards.  Eventually, I started forgetting to put that chain on and soon afterwards it was locked away as well.  I replaced it with a Miraculous medal and a St. Benedict medal.

Have you ever called your wife by your late wife's name?

Nope, but she has called me by her ex-husbands name once before (entirely by accident).  I think this is a big fear that anyone has, divorcee or widower, that you will screw up and call your new spouse by your old ones name.  Don't sweat it.  If it happens, laugh about it and move on.  Life's too damn short to worry about stupid things.

I think this is another highly individualistic questions.  For me, I quickly started calling my first wife by her name.  I'm blessed (or maybe cursed) with a clear sense of organization and legality.  My first marriage ended with the fulfillment of the final vow I made.  As Scripture says, there is no marriage in heaven and the relationship I had ended.  As for Jennie, I simply call her my wife because that's who she is.

Did you pick someone who is like your former wife?

Not really.  I mean, they both were blondes, so i guess that's my type!  One of the mistakes I made early on was to run from everything that was good in my  marriage and find the opposite of it.  I quickly realized that those things that were good about Theresa were not unique to her, but something universal that any good woman should have.  Things like motherly instinct, strong compassion for others, a nurturing personality.  Those are qualities that a man should look for in his wife.  So, with that said, there were some things that were similar.  But, by and large, they are completely unique people and special to me in vastly different ways.  And that is one of the things that people seem to have a hard time with, probably due in large part to the vast number of divorced people in the world.  When your spouse dies, you don't stop loving them and you don't forget all the good that came from that relationship.  When you divorce someone, you usually stop loving them and your emotions turn more towards anger and resentment.  I think that's why so many people have a hard time dating someone who is widowed..it's easier to understand someone who hates or is angry with their former love.


What did you do with her stuff, with family photos?

Again, this is a highly individualistic question and everyone may answer differently.  The afternoon of Theresa's funeral, all of her clothes had been packed away and made ready for donation to St. Vincent de Paul.  I kept three things out of all those clothes.  A pink disneyland hat that she wore on all of our island hopping vacations, a green scarf from Ireland and a blue sweater.  That latter two items were ones that Ryan wanted and he keeps them in his room.  The pink hat, in a box somewhere.  As for pictures, I kept a few of the family pictures up in my old house and packed them away when we moved a year later.  Ryan wanted some  for his room and he has them on the wall.  Everything else has been either boxed or given away.  Our new home has pictures of our new life, as it should be.

I will leave you with this.  People like me, you know, young widows/widowers are just like you, people.  We've been through something that most married people will go through, just not quite as early as we did.  Don't be afraid to talk to us about our lives or our loves.  If we don't want to talk about it, we will tell you so.  If we do talk about it, consider it a gift of wisdom from those who have been to hell and found the way back.  And remember this:

"Life moves pretty fast.  If you don't stop and look around once in a while, you could miss it".  Live each day to the fullest and have no regrets. 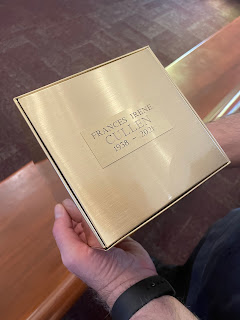