I Married A Stepford Wife?

***The names have been blurred to protect the idiots, I mean contributors.***

When I said "I Do" in June, apparently I did not know that I was saying that to a Stepford wife. I equated that word with the 2004 movie shown above. Little did I know that there is also an urban dictionary entry for Stepford Wife. It reads " 1. Used to describe a servile, compliant, submissive, spineless wife who happily does her husband's bidding and serves his every whim dutifully. 2. Can also be used to describe a wife who is cookie-cutter & bland in appearance and behavior. Subscribes to a popular look and dares not deviate from that look."

Before anyone thinks that I have lost my mind, let me explain where that comment originated.  Unless you have been stranded on a deserted island or just awoken from a long winters nap, you would be hard pressed to find someone who has not seen the drama playing out in the United States Senate over the nomination of Brett Kavanaugh to the United States Supreme Court.  In the interest of brevity, I'm going to assume everyone knows that saga.

My wife attended an all-girls Catholic high school in Phoenix.  She has many of her classmates as social media friends and one of them posted "1 believe her.  I believe you."  Jennie, commented on the post and said (paraphrasing), "How would you feel in 30 plus years if your son was up for a Supreme Court nomination and someone came out saying her tried to rape her without evidence...I have three girls and a son so don't think I take these accusations lightly."  This drew a quick response from the OP, who replied on emotion and without taking into account the lack of evidence presented to support the claim made by Dr. Ford. 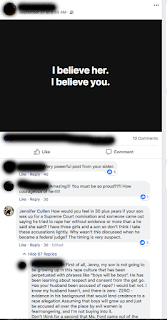 My wife, trying to interject logic into the conversation, brings up the lack of evidence once again and suggests that the timing of the process was suspect.  The OP doubles down, and decides to say that the Senate will not let the FBI investigate (Strike 1), and brings up the topic of priest sexual abuse.  "As for he said/she said, You're absolutely right.   I wasn't in the room when this attack happened.  Of course, I wasn't in the room when priests in the Catholic Church were sexually violating young boys, but I believe them, even though they brought it up 30 years later."  Again, arguing from logic, rather than emotion, Jennie brought up that when the priest abuse victims named a person, place, time(s) and other pertinent details, they are very credible. 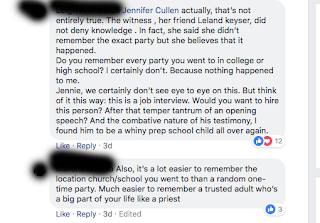 Jennie writes the following to the thread and makes the "fatal flaw" of saying "Hopefully the next generation will be able to start reporting, that's the only way it is going to change."  And that's when the fangs came out from her XCP classmates. 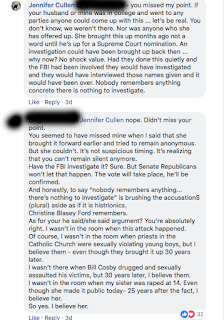 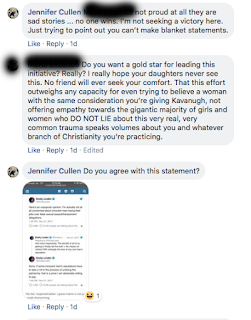 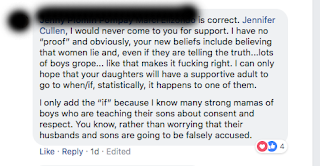 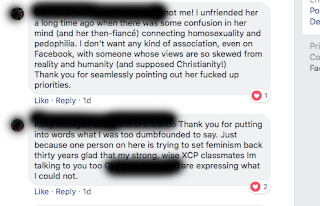 My favorite poster came in the name of Christina, aka Hissy Chrissy.  She was the one who labeled my wife as a Stepford Wife who needs to stop with the "I have a son business..because she has been a stepmom to a preteen boy for barely more than a millisecond who is no expert on raising boys who fashions herself an expert on everything. Hissy tells the token man on the group, Buddy , how she unfriended Jennie a long time ago when there was some confusion on her mind ( and mine apparently) on the link between homosexuality and the priest pedophilia crisis.  That was too much for Chrissy...she wanted no association with someone whose views are so skewed from reality and humanity (and supposed Christianity!)  Thank you for seamlessly pointing out her fucked up priorities.  Hissy Chrissy ended by saying she will pray for Jennie, for her to stop drinking the koolaid, to not be such a hypocritical Catholic and in the future to think about her daughters on the Supreme Court and not just her stepson.

Chrissy's hissy emboldened the other prep schoolers who decided to hang setting back the entire feminist movement back 30 years on my wife, while telling her, to shut up, seriously just shut up.  One of the ladies even posted a  GIF of a woman doing the hula hoop, in a skirt, while running a vacuum (funny because we have a robot that vacuums the floor and I am the one who uses the vacuum in our house.)  One of the posters linked to a tweet from Emily Lindin in November 2017 that said, "Here's an unpopular opinion:  I'm actually not at all concerned about innocent men losing their jobs over false sexual assault/harassment allegations.  If some innocent men's reputations have to take a hit in the process of undoing the patriarchy, that is a price I am absolutely willing to pay."  And it was at that moment the true purpose of the posts, Chrissy's Hissy fit and the dogpile became clear.  These elitist prep school graduates don't want truth or justice, they want blood.  If good people suffer along the way, so be it.  This is a mob mentality.  If you don't agree with me, no matter how stupid my point is, you are part of the problem and I don't care if you are a casualty along the way.


Either these good Catholic girls were absent during their theology classes, chose to ignore what they were taught or they weren't taught the true faith.  Going back to the original point raised by my wife, that you need evidence to make an allegation that has the power to destroy someone.  Section 2477 of the Catechism reads: "Respect for the reputation of persons forbids every attitude and word likely to cause them unjust injury.  He becomes guilty of rash judgement who, even tactily, assumes as true, without sufficient foundation, the moral fault of a neighbor.  As my wonderful wife pointed out, there is not one shred of credible evidence that has come forth in the Kavanaugh matter.  Yet, these "Catholic women", have already judged the man guilty, even to the point of not caring if innocent men suffer so long as patriarchy is undone.

I'm not sure I'm qualified to comment as I've only been the stepfather to three girls for 4 months, which is a whole lot more than a millisecond (really Hissy Chrissy, did they teach you math & science at XCP?  A millisecond?)  However, our girls and son are being taught to respect everyone.  The girls are taught that no one should ever violate them in any way and are encouraged to come to us with any matter.  If something were to happen to them, the police will be involved, period.  You know why?  Because they will have names, dates, times, places, answers to questions that Dr. Ford had none to.  That's the way our legal system works.  You are not judged guilty absent compelling evidence beyond any reasonable doubt.

My son is being raised as a real man should be raised and will be taught things that I never was because he is growing up in a world that hates men.  If you don't believe that, just look on your smartphones app store for the Consent app.  Yep, there's an app to get a man and woman to sign consent to do, well you know what.  I will teach him to never put himself into a position where someone can make an allegation against him, false or true.  That is the only way to defend yourself against the mob mentality that says  "Here's an unpopular opinion:  I'm actually not at all concerned about innocent men losing their jobs over false sexual assault/harassment allegations.  If some innocent men's reputations have to take a hit in the process of undoing the patriarchy, that is a price I am absolutely willing to pay."


Finally, I feel compelled to defend my wife from the Stepford Wife label and hypocritical catholic labels..  She is far from spineless, servile, compliant, cookie-cutter, one who does my bidding and serves my every whim dutifully.  She's a great mother, step-mother (of a boy for far long than a millisecond, Hissy Chrissy), strong, fiercely independent and my best friend. As for being a hypocritical catholic, her position is the only position that a catholic should be taking right now.  Absent real evidence, this charade should have never seen the light of day.  Take a few days to read the Catechism of the Catholic church, you know the one they probably didn't bring out during your high school days.


PS...Contrary to the post of Leigh Ann , the republicans did order the FBI to investigate. If it turns up no evidence, I assume you all will repent of your calumny, right?

PS(2) - The prosecutor who asked the questions of Dr. Ford produced a report where she said she would not go forward with prosecution of the case due to lack of evidence and multiple inconsistencies in Dr. Ford's story.  Does that make her a "Stepford Wife" too?

PS(3) - It was fun seeing how quickly they came out of the woodwork to get their names blurred out. One of them, citing some ridiculous belief that posting in a group where only friends are posting, believed it was a violation of her privacy.  As we tell all the children, once you press return, it is gone forever.  Anyone who is a party to the conversation can cut, paste, edit and clip.
Maricopa Prosecutor article