A few weeks ago Ryan suggested that he and I do a roadtrip down to Tucson.  We could eat at some of our old favorite restaurants, do some of the fun tourist things we used to do, visit with some old friends and take a stroll down memory lane.  We drove to Tucson on September 4th and stayed in an AirBnb in the Catalina Foothills.  On Friday we drove by the house we moved into in April 2017 and sold in November 2017.  This was the house we moved to from the one we had where Ryan, Theresa and I lived. 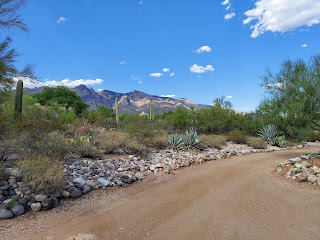 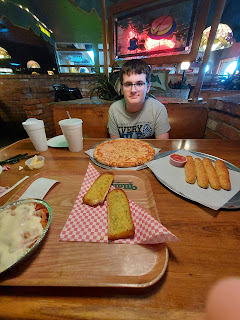 We did some fun things on Saturday morning, got lunch at Frankies Cheesteaks and drove down to our first house in Arizona located in Sahuarita.  I noticed that Ryan wasn't saying much on the drive down but he was looking out the window as the scenery of I-19 went by.  We pulled into our old neighborhood and I asked him if he remembered the way to our house.  He shook his head no.  We made our way through the maze of side streets until we turned down the road that went by the old place.  I looked over at Ryan and could see that this visit made him sad. 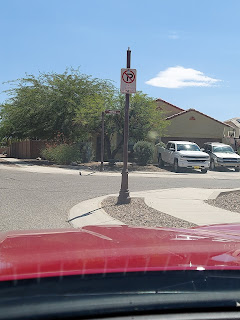 Since we moved from Sahuarita in 2017, I had driven by that old house at least 5 times on various trips to Tucson.  It never occurred to me until Saturday that this was the first time Ryan had been back to that place since we moved from it after his Mom had died there.  We finished the trip to Sahuarita driving past his elementary school and headed back to our AirBnB.

We headed to our old parish church, St. Melany, for the Saturday Divine Liturgy.  During the homily, Fr. Rankin spoke on fear and grief.  He said, "there are many people here today who can identify that one of the hardest things to do is to go back to church following the funeral of a loved one because that is the place where the funeral took place."  It was a timely homily to hear given the sadness that my boy had earlier in the day when he returned to his first home for the first time since he left it after the death of his Mom.

I remember well the timeline of events that took place after Theresa died on a Monday.  We made arrangements on Tuesday, had her Parastas on Wednesday, her funeral on Thursday and returned to church on Sunday.  I remember all the things that Ryan said he could no longer do:  I can't ride in Mom's old car again; I can't sleep/stay in this house anymore; I can't sit through Divine Liturgy because church is the last place I saw Mom.

This is the strength of the human spirit.  From a little boy saying all the things he could not do, he continued to sleep at the Sahuarita house for more than a year after his Mom died there.  He did ride in her old car, albeit for only a short period of time, until we traded it in.  And he did sit through many Divine Liturgies at St. Melany because that is what we do as Catholics, we attend our Divine services.  Nearly 5 years later, he sat in another Divine Liturgy in the church where his Mom was resting for her funeral Divine Liturgy and heard his priest speak about returning to church to experience the liturgy, seeing that the church is the portal to heaven and having faith to look beyond the physical experience of seeing a casket and body to see the hope of the Resurrection.  To not have that ability to see beyond the physical is a sin against faith. 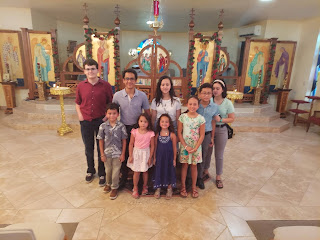 I am proud of my boy for just how far he has come since those conversations about not wanting to stay in his house.  His growth as a person and ability to overcome the giant obstacle that was put in his path is a testament to the power of faith.