A Lifetime of Change in 5 Years

"Love endures everything, love is stronger than death, love fears nothing." Sr. Faustina

Last week was Holy Week for Catholics around the world.  The triumphant entry of Our Lord into Jerusalem on Palm Sunday, Holy Thursday, Good Friday and Easter Sunday led believers on a wave of emotions from joy to disbelief to sadness and finally to joy.  Five years ago Holy Week fell a little earlier in the year, March 20th to March 27th.  I remember that Holy Week like none other before it.  It was the last week where Theresa was able to have a rational conversation and the first Pascha for us spent in a hospital.

In a blog post dated March 28, 2016, I wrote about how impressed I was with Ryan when he told me he was taking the $5 he received in his Easter basket and buying his Mom some chocolate to enjoy with our Easter dinner in her hospital room.  I took many photos during that Holy Week but this one was one of my favorites from the week.  My boy climbed up in the bed with his Mom and shared some of the Easter goodies with her.  Little did we know that she had just 20 days remaining on her earthly journey. 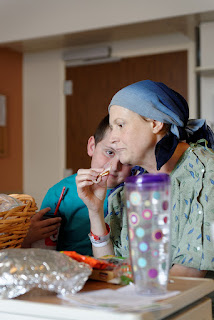 Today we spent another few hours on a Sunday in another hospital room keeping my Mom company for a little while.  On Friday I received a call from Jennie that Mom had fallen on the tile floor and thought her hip was broken.  We called Phoenix Fire and had her taken to the hospital where they confirmed that she did have a broken hip.  The surgeon scheduled her for Saturday morning and they repaired the fractured hip by driving a rod into her femur and screwing it into the bone that goes into the hip joint.  When we picked Ryan up from the bus stop on Friday he knew something was up as both Jennie & I were in the car.  When I told him what had happened he got really quiet and wanted to go see her.  We were able to spend sometime with her on Friday.  Before leaving he asked for a few minutes alone with her and we left after that.
We went to visit Mom again today after attending the Mass for Divine Mercy Sunday.  They put her in the intensive care unit because her blood pressure was really low and her heart was experiencing bouts of atrial fibrillation.  We grabbed some lunch before going to the hospital at a pizza place called Barro's.  There is a drink they have at Barro's called Stubbon Agave Cream soda that both Ryan and Mom like.  When we got to her room, Ryan took the refill he had gotten and gave it to his Grandma saying this is the cream soda we both really like.  What a flashback moment I had sitting in that room.  Instead of taking his $5 and getting something for his Mom, he took his favorite drink and gave it to his Grandma. 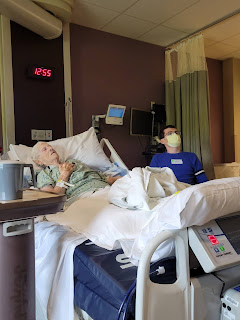 We sat with her for a little over one hour and he just sat by her side to keep her company.  It gave me time to reflect on just how much Ryan has grown in 5 years since his world was turned upside down.  By no means has this been an easy journey.  We moved twice, once to Oro Valley and ultimately to Cave Creek.  Ryan started middle school in a new city and ended up in a different school for the second half of 6th grade where he remains today.  He saw his Dad get married again, bringing a whole new dynamic of stepmom and stepsisters to his world.  He has watched his Grandma go through 5 more years of cancer treatment with all the ups and downs that entails.  And all of this taking place as he grows into a man and all the hormonal challenges that come with that.  And through all of this he has finally found his stride and is doing well in school and life.   One of my phrases that I repeated again and again to him was "as humans we can not go backwards and we can not stay stuck in today.  The only way for us to move is to go forward."
The Second Sunday of Easter is known as Thomas Sunday in the Eastern church and Divine Mercy Sunday in the Western church.  It is called Thomas Sunday because the Gospel of John is read where Thomas was not present when Christ appeared to the 10 Apostles after his Resurrection.  Thomas said that he would not believe it was the Lord until he put his hands in the wounds of Jesus.  8 days later Christ appeared again to the 11 Apostles and told Thomas to put his hands into the wounds.  Thomas responded with a profound statement, "my Lord and my God".   Jesus said to Thomas, "You have believed because you have seen me.  Blessed are those who have not seen and yet believe" 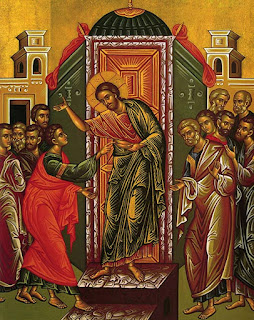 It is called Divine Mercy Sunday in the West because Pope John Paul II canonized Sr. Faustina in 2000 on the Second Sunday of Easter and proclaimed that this Sunday would be known as Divine Mercy Sunday.  I have told Ryan the story of John Paul II, how he lost his mother at the age of 8, his brother 4 years later at the age of 12 and his father 9 years later at the age of 21.  No one in this fallen world would have blamed John Paul II had he taken a different path than he did.  He lost every family member of his by the time he was 21 and was growing up under communist oppression in Poland.  He once said that you have two choices when adversity strikes, you can become bitter or you can get better.  Rising through the clerical ranks to assume the Chair of St. Peter and remain there for more than 27 years, clearly he took the better, not bitter route. 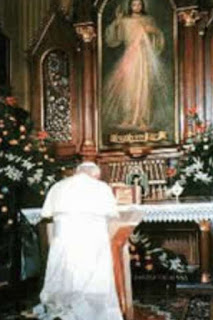 These two Sunday's came together today watching Ryan sit with his Grandma.  Just like Thomas, there was much doubt in his mind when we talked about the future and that things would get better.  I know for many months and maybe a couple of years he didn't believe that going forward was going to be a good route.  Through all that doubt he has chosen to become better, not bitter, and it shows with how well he has handled his Grandma's hospitalization.  For the first time in almost 5 years, I am not as concerned about how he will handle the anniversary of his Mom being born into eternity.  Glory to Jesus Christ! 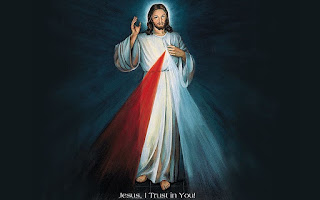 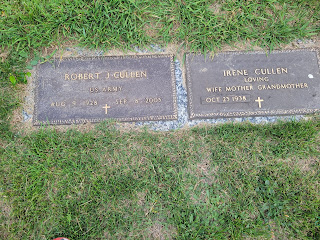